There’s currently a disconnect between the number of qualified, diverse candidates in the workforce and the number of diverse employees in top industries and companies.By not actively pursuing hiring methods to increase their diversity, companies are actually doing themselves a disservice that could lead to slowdowns in growth and revenue loss.

A McKinsey study has concretely proven that ethnically and gender-diverse companies are more likely to outperform those that aren’t. How prevalent is the diversity problem, how is it perpetuated, and how can we fix it? We’ve broken down the answers for you.

Though Whites may make up the majority of the labor force, comprising over 79%, when you take a look at the percentage of the labor force over 25 years old with a Bachelor’s degree or higher, the distribution begins to shift. Asians have the highest proportion of people with a Bachelor’s degree or higher, with Blacks and Hispanic/Latino numbers not far behind. 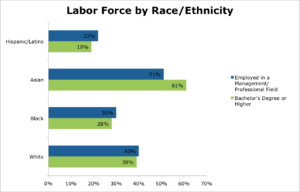 Data Courtesy of the Bureau for Labor Statistics

Many companies cite a lack of qualified, minority applicants as the reason their diversity representation is less than adequate. But when some minorities make up a comparable percentage of the highly educated labor force in professional fields, how can this be true?

It’s 2016, why hasn’t the problem corrected itself already?

The hiring decisions that lead to the disproportionate representation within a firm we saw above is not always a conscious one. Studies have shown that there exists a number of inherent biases that affect how recruiters vet potential candidates.

You may have heard of something called the Airport Test. If you haven’t, you’ve probably been a victim of the test anyway. During behavioral interviews, interviewers use the Airport Test to assess whether or not he or she would be okay with being stuck with you in an airport. If they decide they couldn’t stand to spend a few hours in an airport with you, chances are they wouldn’t be okay with working alongside you for an extended period of time.

While the Airport Test may seem amusing, it’s an indication of some of the inherent problems that come with behavioral interviews. It’s human nature to prefer someone who is similar to you, which means that interviewers tend to prefer candidates who are most similar to themselves, thus perpetuating a cycle where the same kind of applicant gets hired year after year.

In addition, company hiring tactics that drive prestigious firms to mainly recruit at prestigious, highly-ranked universities may also contribute to the skewed diversity numbers. It has been proven that resume reviews are not accurate indicators of an employee’s performance once they’ve been hired. So when recruiters arbitrarily limit the scope of their search based on the fancy name at the top of a resume, they leave out a whole slew of determined and accomplished students who may be better suited for a position.

Diverse candidates prefer to work at diverse companies and 71% of companies report that employee referrals are the main pipelines that lead to diversity hires. What this means is that many companies are caught in a nasty cycle where their current lack of diversity limits new diversity talent.

How industries are moving forward

Many companies are beginning to implement college recruitment tactics aimed specifically at women and minorities as well as diversity task forces. The Harvard Business Review found that companies that partook in targeted recruiting schemes experienced anywhere from an 8-18% increase in diversity representation among managers over 5 years. Those that implemented diversity task forces saw as high as a 30% increase. Such tactics increase the visibility of existing minority employees at a company, but also provide networking opportunities for students who may not have otherwise had connections.

Mentoring programs have also proven effective in increasing minority representation. A Georgetown study found that white male executives often feel uncomfortable informally reaching out to young women or minorities, but when assigned a mentee are more than willing to take on the responsibility. Many firms, regardless of industry, have also begun creating women or minority-specific networks within the company that work towards increasing the diversity presence, fostering a sense of community, and providing specific resources for its members.

Diversity hiring is a problem that has not self-corrected in past years. Fortunately, there are a number of great companies working to ensure that talented, diverse students are being fairly judged by the quality of their resumes. WeSolv and Jopwell are working to eliminating many of the inherent biases currently found in the recruiting process by creating a direct pipeline between qualified minority applicants and companies.

Jopwell creates a platform for companies to directly target, recruit, and hire minority applicants. WeSolv connects students with companies to solve real business challenges. Think of a case competition, but rather than just solving some fictional case for some prize money, you’re creating real solutions for real companies to compete for real jobs. Companies get talented students with a proven ability to perform and students get real company work experience. It’s a win-win.

TransparentCareer offers students the tools they need to be fairly compensated and valued.

Sign up for free to get more industry data, as well as data relating to compensation and career navigation, all tailored specifically for you!