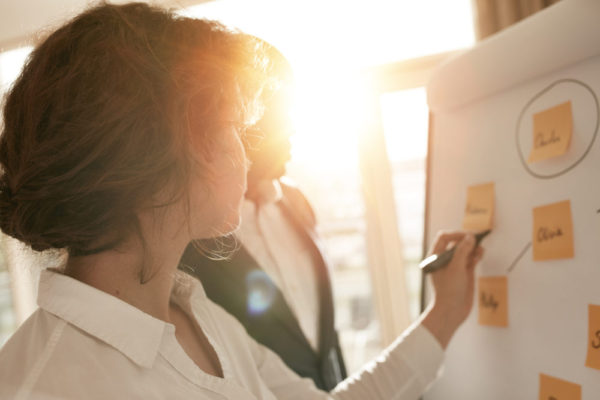 Earning an MBA opens the door to great career opportunities, and choosing between thousands of companies can be hard. There’s no one-size-fits-all firm, but we’ve analyzed our data to identify employers highly rated by the female MBAs currently working there. Read on to discover which companies did (and didn’t) make the list of top companies for MBA women.

Remember, our data is 100% user-reported from real MBAs, and verified by both algorithms and human beings (yes, us!) – so really, we didn’t rank them, you did.

Microsoft claimed the top spot on our list because of their (way) above average compensation and stellar satisfaction scores. The tech giant also offers good work-life balance and opportunities across a variety of functional areas. Microsoft is also actively working to encourage more women to pursue jobs in tech, and its GirlSpark initiative is in its third year in Hong Kong.

While MBA grads working at Fidelity reported the same perfect satisfaction scores as their peers at Microsoft, average starting compensation is a whole lot less. Fidelity also strives for workplace diversity and inclusion, and offers employee resource groups such as the Women’s Leadership Group and Fidelity Pride.

Bristol-Myers Squibb is yet another company to elicit perfect satisfaction scores, which helped them secure spot #4 on our list. Employee satisfaction may be high, but the pharmaceutical giant slipped in the ranks due to its below-average starting compensation. However they are a leading force in diversity within the upper ranks of the company. Women currently hold only about 14% of the top management positions in S&P 500 companies,  but Bristol-Myers Squibb is proud to report that almost 32% of executive level positions at their company are held by women.

Apple is popular among consumers, and seems to fare well with its employees too. Satisfaction scores are above average even though typical work weeks can be long. Female MBA grads at Apple also reported above average salaries with attractive bonuses.

Cognizant is the highest ranking consulting agency on the list with a composite score of 82, thanks in part to its nearly perfect satisfaction scores. The Fortune 500 firm fell a bit below average in terms of salary and compensation, but has a favorable work-life balance. Cognizant is also a corporate sponsor for the Forte Foundation, which encourages and assists women launching business careers.

The next consulting firm on our list may have lower employee satisfaction, but the average compensation at ZS Associates clocks in a bit higher at ~$182K. The above-average compensation package reported by MBA grads comes at the expense of workweeks that are slightly longer than average.

Bain’s well-known as a top dog in the consulting world, and ranks 8th on our list largely due to great compensation and above-average satisfaction scores from women.  This is balanced by the long work hours (58 hours/week) that are the hallmark of top consulting firms. Once hired, female Bainies can expect not only career training and mentorship, but highly coveted workplace flexibility as well.

Tech giant Google claims the #9 spot on our list thanks to above average starting salaries and compensation packages. Female MBA grads eager to join the company will find opportunities across many different business roles, and current employees report above average workplace satisfaction.

Clorox owns a whole catalogue of consumer packaged goods brands, so it’s no surprise that brand management is a top functional area for MBA grads, male and female alike. Despite earning less than average (reflecting the high concentration of marketing opportunities at the firm), employees at Clorox reveal very high satisfaction scores.. Clorox employees – both men and women – strive for workplace diversity and 31% of Clorox’s executive committee members are women.

Female MBA grads at Accenture report starting salaries and compensation packages that are just below average, but they don’t seem to mind. The average satisfaction score of 8/10 boosted Accenture’s composite score enough to land a spot on the list. Accenture is also home to a variety of female-focused initiatives, such as women’s mentoring programs, defining success forums, and employee resource groups.

Average starting compensation packages at Citigroup are a bit above average, but their composite score was affected by lower satisfaction scores. However MBA grads interested in Citigroup may be intrigued to learn about the company’s below-average work hours. Citigroup also focuses on workplace diversity, and has more than 100 Employee Networks that connect and empower employees of all backgrounds.

MBA grads at Ecolab report starting compensation packages that are nearly $20,000 below average, in part because of popular functions that tend to be lower-paying at all firms. So how did they secure a spot on our list? Employee happiness. Average satisfaction scores were well above average at 9/10. The average work week at the technology company rides around average. Ecolab puts a focus on work-life balance, and even offers a helpful view of a typical weekly schedule for positions.

Appliance manufacturer Whirlpool is perfectly poised just above average on all employee metrics, which was enough to secure a spot on the list of top MBA companies for women. While Whirlpool doesn’t have the highest compensation on the list, they still pay quite well compared to  other consumer products companies in our database of 5,000 employers. Whirlpool is also a corporate sponsor to the Forte Foundation.

Leading consulting firm Boston Consulting Group earned a spot on the list thanks in part to average starting pay that is comfortably above average. However a few points were lost as a result of below average satisfaction and work weeks that are a bit longer than other consultants may experience. Importantly, BCG is committed to advancing women in business as a corporate sponsor of the Forte Foundation.

This list may profile the top 15 companies as rated by the women using our site, but there are over 5,000 employers profiled on our site. Sign up here to easily compare the satisfaction and compensation of the companies you’re interested in – and even dive into specific positions within the firm.

These companies have been ranked on data from MBAs in areas such as compensation, salary, and satisfaction.  All data points are from MBA-related data, i.e. internships or full-time jobs obtained during or as a result of pursuing an MBA. At this time, our data only takes quantitative metrics into consideration, so topics such as “brand prestige” or “career advancement” were not included. We indexed the following metrics versus our all-company averages, with the following weight distribution:

Once indexed and compiled into a composite index, we adjusted to a 100-point scale.

Companies with too few or incomplete data points for female MBA grads were excluded from this analysis, including: